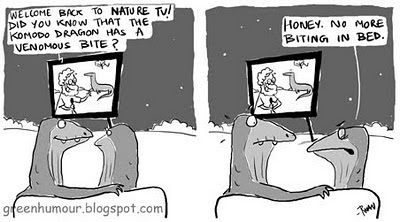 The Komodo Dragon is one of the few lizard species in the world that possess venonous bites. Scientists have established that the venom comes from the bacteria that proliferate in the lizard's saliva. Recently, the presence of venom glands in the lower jaw of the lizard was discovered. These glands secrete toxic proteins that cause blood clotting and muscle paralysis. This unique feature is used by the dragon very effectively to secure prey. It usually feeds on animals much larger than itself, such as deer, pigs and buffaloes. The dragon uses ambush to strike a bite and inject venom into the body of its target, after whcih it follows the animal for several days until the venom brings about its effect on the victim. After the animal collapses, the dragon devours its prey.

This work is licensed under a Creative Commons Attribution-Noncommercial-No Derivative Works 2.5 India License.
Posted by Rohan Chakravarty at 22:11