Uses of the Jaguar's Rosettes 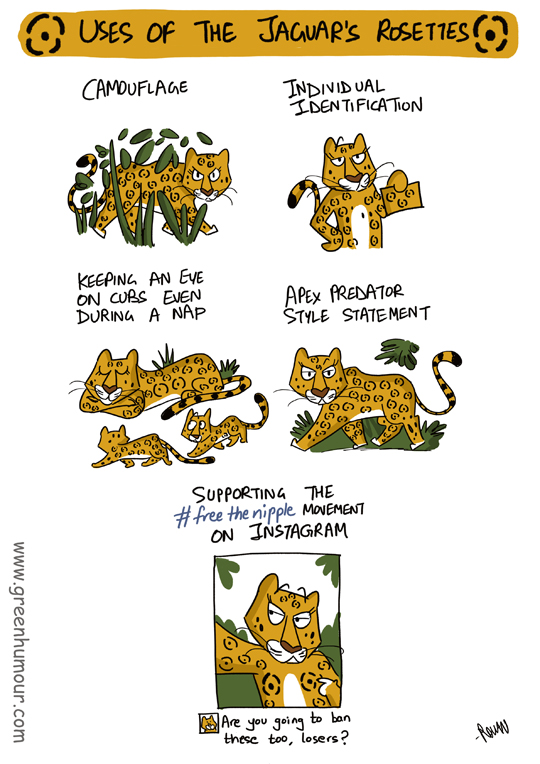 Uses of the Jaguar's rosettes. Comic from my column with Roundglass Sustain.

Posted by Rohan Chakravarty at 07:45 No comments: 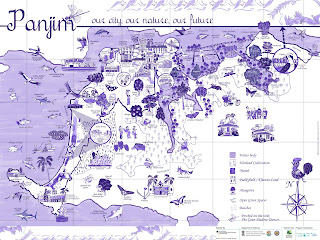 A biodiversity and heritage map of the Goan capital Panjim, commissioned by ICLEI South Asia. Situated on the banks on the Mandovi River, Panjim is dotted with a rich network of estuaries and mangroves, which are home to diverse coastal flora and fauna. Migratory waders throng Panjim's beaches and mudflats along the Ribandar causeway and the Salim Ali Bird Sanctuary, which is also home to estuarine reptiles like the Glossy Marsh Snake. The mangrove ecosystem along the coast host many commercially important fish, crustaceans and the elusive Smooth-coated Otter.  Goa's proximity to the Western Ghats ensures that a variety of endemic insects and herpetofauna make Goa their home, including the Goan Shadow Dancer perched on the title of the map. The star of the Arabian Sea, the Indian Ocean Humpback Dolphin dwells where the estuaries of Panjim meet the sea. Innovative but endangered traditional livelihoods which Goan communities have evolved such as the Goan salt-pans and sluice-gate fishing, are depicted on the map.

Some of Panjim's most important heritage buildings also feature on the map. The illustration style itself pays tribute to Goa's iconic Azulejos tile art, which came with the Portuguese and became Panjim's visual identity. A Goan rooster perches on the map's compass. As Panjim grapples with rapid expansion as Goa's capital city, the illustration is meant to serve as a reminder of what the city must preserve and coexist with.

A huge thanks to my dear friend and Goan conservation biologist Nandini Velho, my partner and ICLEI's Assistant Manager Rithika Fernandes, Sayeesh Pirankar and Hycintha Aguiar (ICLEI) and Goan tree expert Dr. Usha Desai for their generous help and inputs for the map (and for some lip-smacking food recommendations!).  Thanks to ICLEI for commissioning a series of delightful, exploratory and experimental map projects. The illustration is available in a high resolution here.

Here are a few close-ups from the map: 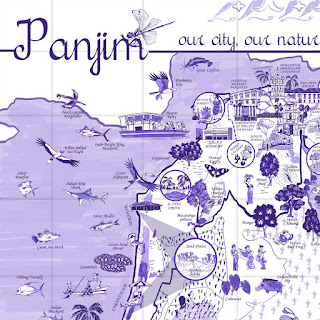 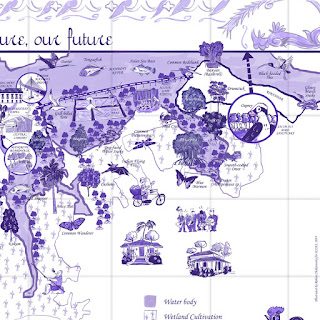 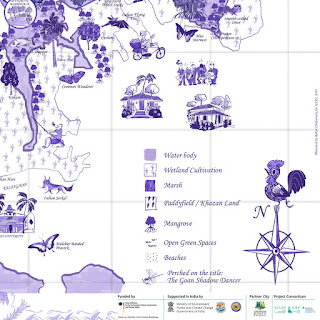 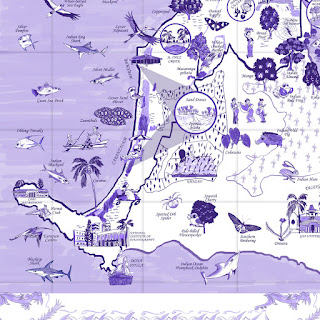 Posted by Rohan Chakravarty at 18:13 No comments: 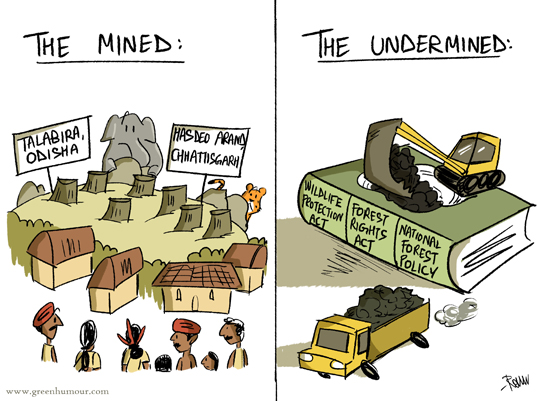 Posted by Rohan Chakravarty at 07:58 No comments: