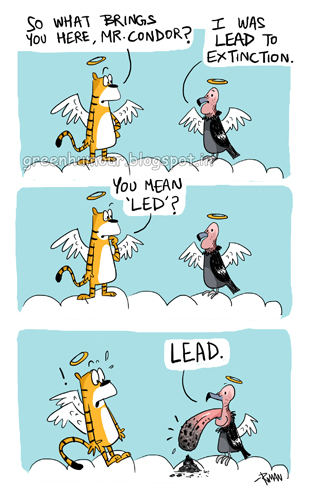 The California Condor, North America's largest land bird is critically endangered. One of the many causes of this is lead poisoning. Condors feed on carrion, and often ingest lead particles from the carcasses of deer and other game shot with lead bullets. Conservationists and organizations are working towards implementing a ban on lead ammunition to remove this threat. Being extremely slow breeders, the condors are left without a chance to make their populations recover and there are just about 400 + condors in the wild today, making this species one of the world's rarest birds.