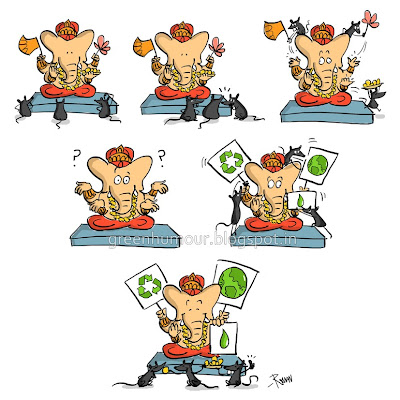 The celebrations during the Ganesha festival in India are a major source of pollution to both inland and coastal waters. The pollution can be attributed to several factors, the foremost being the immersion of idols made of Plaster of Paris and coloured in chemical paints. Several other factors include noise pollution, increased emmissions owing to traffic jams during the festival, release of plastics and other waste into water bodies along with the idols. Environmental awareness is on the rise among devotees, with many resorting to greener ways of celebrating the festival such as clay idols, idols made of recycled material and immersion in indoor tanks. A lot still needs to be done if the environmental impacts of Indian festivals are to be minimized, and I don't think it will be a bad idea to resort to the gods themselves for help- I don't mean just praying, but little tweaks in the design of the idols such as in the cartoon, shouldn't do any harm!