Monsanto and the Nobel Prize of Agriculture 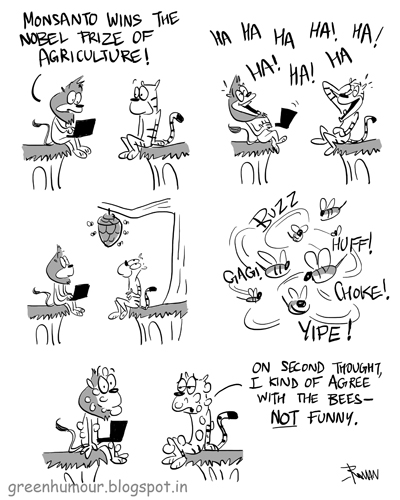 If you're a fan of bizarre news, this one's for you.

Monsanto winning the Nobel prize equivalent for agriculture is not just expected, but also very delayed. No single company has done more to make sure that agriculture, the definitive development that made the nomadic humans independent for their food and served to make civilization possible, is now as nature intended- dependent on greater forces of existence, namely large corporations. Their benevolent 'creations' include, amongst other feats of marvel, bio-pesticide producing seeds. These seeds produce chemicals that are so effective that they kill any Insect that tries to feed on them. It is democratic, so that it practices no discrimination. Crop destroying pests, symbiotic life forms and bees that are responsible for pollinating huge percentage of crops- Monsanto ensures they all die. Who could deserve a Nobel more? (Text- Pallavi Talware)