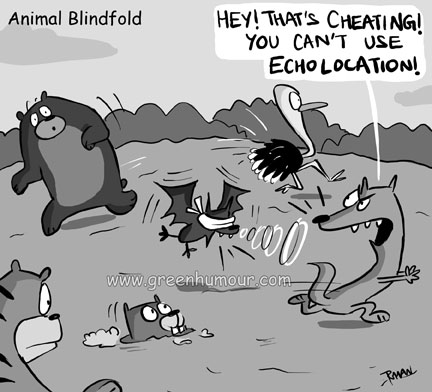 Microbats use echolocation both for foraging and navigation, and are capable of doing so in complete darkness. This enables them to prey on nocturnal insects and avoid competition from other insectivores. They emit unltrasound from the larynx, but some species such as the horseshoe bats produce sounds from the nose. Different species use different frequencies of ultrasound and this property has been cashed upon by bat experts to identify individual species using bat detectors.

This cartoon appears in Saevus' issue this month. My brother Rohit who is a wildlife biologist is off to the Andaman Islands to study the bats of the region. I received a bit of hands-on training from him on how to use a bat detector a few months back at the NCBS campus in Bangalore. The device makes these guys sound like they're giggling at dirty jokes!