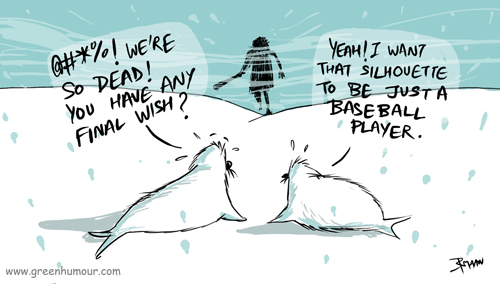 Seal hunting is one of the most gruesome forms of hunting, still practised in regions like Canada, Greenland, Norway and Russia. Baby seals are clubbed to death to avoid damage to the pelts from bullets. The prime victim of this atrocity is the Harp Seal, other preferred species being Hooded and Grey Seals. Although a majority of the hunting is with the use of firearms nowadays, hunting with the Hakapik, a wooden club with a hammer and a metal hook, is still common. The method involves striking the seal pup with the hammer and crushing its skull and then skinning the animal. Seal hunting has attracted severe criticism over the years and Canada, which is the largest seal hunting ground, is the centre of the seal hunting debate.

This cartoon appeared on my Gocomics page today.
Posted by Rohan Chakravarty at 17:04