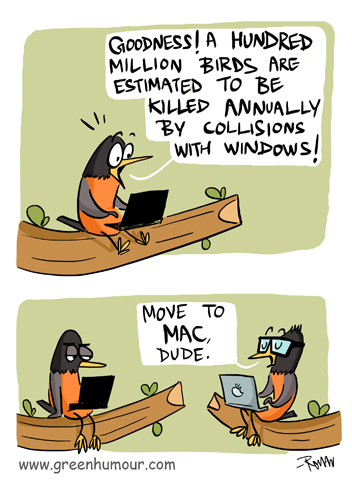 Millions of birds die each year from colliding with glass windows, most of them small song birds. While most of these injuries temporarily stun their victims, some result in internal injuries and subsequent death. Birds are unable to make out if the reflection in the window is an actual landscape or just a hard surface, and often crash into them while escaping predators. Several measures have been proposed and successfully implemented to avert this- such as relocating feeders, blocking the reflections with stickers or plastic wrap, attaching hanging objects in front of the windows or placing branches and twigs, and simply netting the windows.

The comic appeared in my fortnightly with The Hindu's BLink.
Posted by Rohan Chakravarty at 08:27