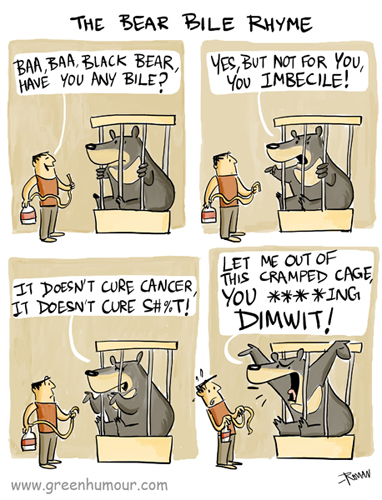 Farming of bears for bile is one of the most ruthless malpractices against wild animals, practised (not surprisingly) in China, Korea, Laos and Vietnam. The bears (usually Black bears or Moon Bears) are kept in 'crush cages' that are so small that the captive bear is rendered completely immobile. The process of extraction of bile itself is excruciating- an open wound or a fistula is created in the bear's gall, from which the bile drips out and is collected. Researchers have reported seeing bears moan and chew their own paws in pain during bile extraction. The wound is vulnerable to lethal infections, increasing their mortality rate. Even though science has proven bear bile to be of no medicinal use, its consumption continues as an ingredient of Traditional Chinese Medicine.

The comic appeared in my fortnightly with The Hindu's BLink.

Posted by Rohan Chakravarty at 23:03