David Slater and the Celebes Macaque 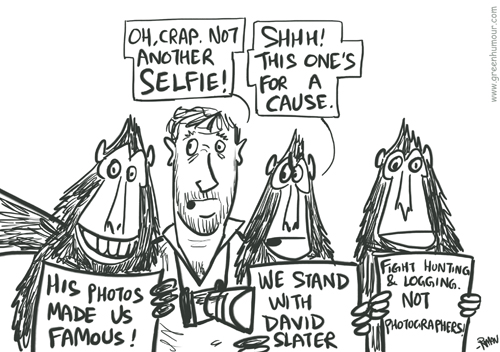 In 2011, wildlife photographer David Slater planned and executed his now famous (and controversial) photograph, the 'Monkey Selfie'. A little known species then, the critically endangered Celebes Crested Macaque, found in Tangkoko Nature Reserve in Sulawesi, Indonesia, shot to fame. If anything, it was his picture that helped raise awareness about these macaques.

Ever since publishing his images of the macaque, Slater has been in legal turmoil, with PETA having sued him over copyrights, which they absurdly claim, belong to the monkey! This nonsensical lawsuit has not only left Slater bankrupt, but has also taken focus away from the real conservation threats that the macaque faces- hunting for bushmeat and logging of its habitat.

As artists and photographers working towards the conservation of wildlife, I believe that we must stand in support of a fellow-artist, and call to end this harassment and instead focus on fighting the right fight. Let's stand with David Slater.

Posted by Rohan Chakravarty at 10:35