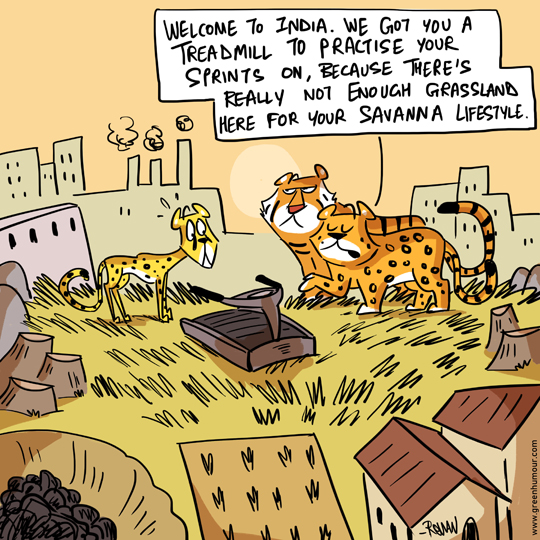 Envisioned as early as 2011 by the then Environment Minister Jairam Ramesh, the proposal to introduce cheetahs to India had been rejected considering the lack of habitat and prey for the savanna cats, which have been extinct in India for 70 years now. But now the Supreme Court of India has cleared the plan to reintroduce Cheetahs from Namibia to India. While most conservationists feel that this is a case of misplaced priorities and that India should instead be focusing on preserving the already existing cat species and their habitat, some argue that cheetah reintroduction could save grasslands, otherwise largely ignored by conservation policies. Another point to note is that Kuno Wildlife Sanctuary which has been prepared and assessed for the establishment of a second population of Gujarat's Asiatic Lions imperiled by inbreeding and disease, could be a site for the reintroduction of the cheetah, which would leave the fate of our Asiatic Lions suspended in uncertainty.

Cartoon from my column with RoundGlass Sustain.

Posted by Rohan Chakravarty at 20:34