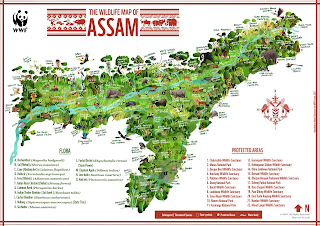 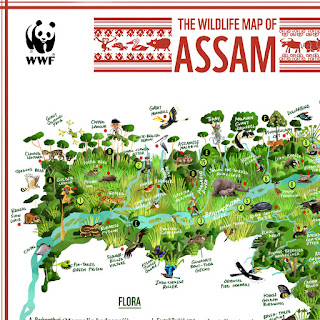 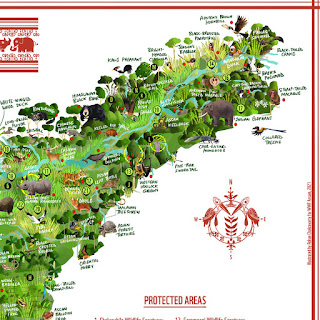 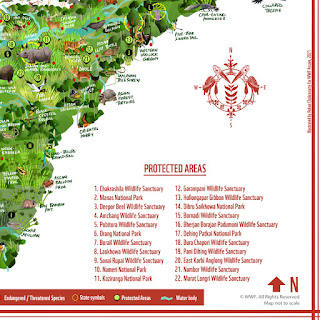 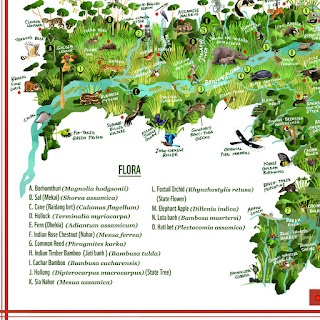 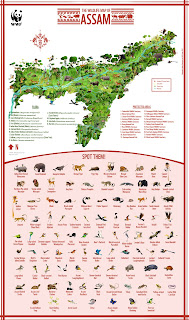 Easily among the states with the richest biodiversity in India, Assam is a true jewel in the North-eastern crown. Its floodplains, both ravaged and replenished by the mighty Brahmaputra, are home to Indian giants like the Asian Elephant and the One-horned Rhinoceros (the state animal), the world's smallest pig- the Pygmy Hog, as well as endangered birds like the Black-breasted Parrotbill. Its forest streams and marshes offer refuge to its state bird, the rare White-winged Wood Duck, and its hills house endemic species like the Cachar Bulbul and the Assam Laughingthrush. Assam's birdlife is much sought after and celebrated by birdwatchers from India and abroad, boasting of nearly 700 bird species, made possible by the merger of the dense Himalayan foothills and the fertile Brahmaputra floodplains in the state. Assam's cities and towns protect rare inhabitants like the Greater Adjutant Stork, and lakes like Maguri Bheel (unfortunately ravaged by an oil fire last year) are home to large numbers of migratory waterfowl, including the critically endangered Baer's Pochard. And its hill forests are home to some of the rarest Indian primates: the Golden Langur, the Hoolock Gibbon, and the Pig-tailed and Stump-tailed Macaques. Assam also has the highest number of freshwater turtle and tortoise species for any state in India!
The compass of the map pays tribute to Hargilla Army, an all-women team dedicated to conserving the Greater Adjutant, led by Ms. Purnima Barman. Thanks to Ms. Archita Baruah Bhattacharya and WWF India for commissioning the illustration! (Copyrights belong to WWF India)
Posted by Rohan Chakravarty at 07:53