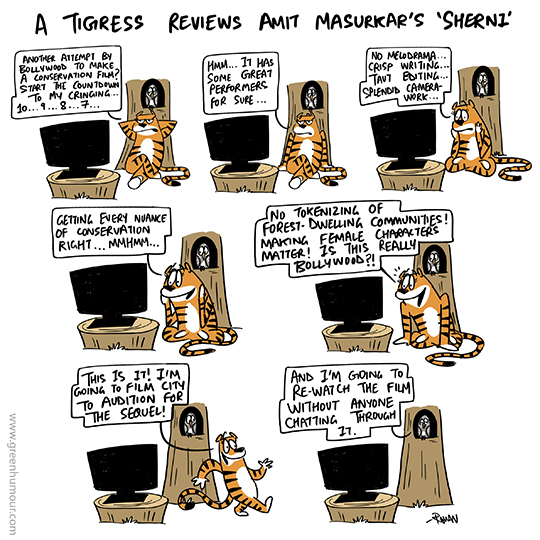 Amit Masurkar's new film about the challenges, sociopolitics, and the many grey areas of tiger conservation in India, is sure to go down in history as the first accurate portrayal of conservation issues in mainstream Hindi cinema. Other than having some stellar performers (Vidya Balan, Vijay Raaz, Sharat Saxena, Brijendra Kala and Neeraj Kabi among others), Sherni is also a beautifully made film, with various aspects of filmmaking being quite simply, top-notch. A completely palpable and believable Vidya Balan portrays DFO Vidya Vincent with both the calmness and grit that I have witnessed in so many female forest officers I have had the honour of interacting and working with. The brilliant Vijay Raaz, who I last saw playing a whimsical gangster obsessed with wildlife trivia in the much-underrated comedy 'Lootcase', plays a moth biologist and forest department consultant, while the legendary Sharat Saxena slips comfortably into the role of a hunter clearly based on the egomaniacal and trigger-happy Nawab Shafat Ali Khan. But the prime highlight of the film isn't its theatric or technical perfection, but the fact that the nuances of conservation in India are portrayed with pinpoint precision. If you've ever walked a patrol with a forest guard, interacted with forest-dwelling tribes who are the foremost victims of man-animal conflict without even being the cause, or even spent a few minutes at a forest department office, you will identify with every minute of Sherni's screentime. And of course, a special mention goes to the film's producers at T-Series not just for backing a film of utmost social relevance, but also being sporting enough to take a joke on their own erstwhile hit song 'Achha sila diya'! It would not surprise you to know that Amit Masurkar was the man behind the exceptional political drama, Newton.
A recommendation for those who have watched and loved Sherni: Anay Tarnekar's powerful Marathi short film 'The Kill', starring Radhika Apte and Girish Kulkarni, which speaks about tiger poaching.
Comic from my column with Roundglass Sustain.
Posted by Rohan Chakravarty at 15:46