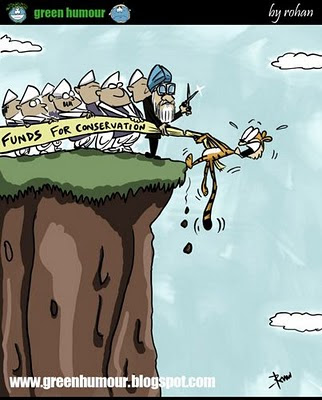 This work is licensed under a Creative Commons Attribution-Noncommercial-No Derivative Works 2.5 India License.
The Tiger and the planning commission- this cartoon appeared in The Sunday Guardian in conjunction with an article by eminent wildlife journalist and author Ms. Prerna Singh Bindra. The article is as follows-

It was at a private function celebrating the tiger, and its deep association in India’s religion and culture that Deputy Chairman, Planning Commission Montek Singh Ahluwalia spoke about his wondrous encounter with the tiger in Ranthambhore. The Minister of Environment and Forests Jairam Ramesh was present as well, and he seized the moment, pointing out the amazing picture of five tigers that graced the wall, “those tigers are sitting on a minefield, “ said he, or words to that effect, with no less than 40 or so mines fringing their reserve (Tadoba). Point made, obliquely, on the raging ‘go-no go’ debate on coal, he went onto to other matters. There is an imperative stressed, to relocate villages, purely on a voluntary basis from core critical tiger habitats. This was one of the major recommendations of the PM appointed Tiger Task Force. Tigers need inviolate areas to breed. People want to shift out, it was a difficult life inside the forests, away from the mainstream, and they must be given the best incentive to do so. The central government offers an enhanced package now for rehabilitation. But, appealed Jairam, they need the funds to take this forward, and a bigger budget from the Planning Commission. To make it happen. To save tigers.Evidently, the deputy chairman wasn’t listening. When the budget for the current financial year came in, it was a shock. For the year 2011-2012, the National Tiger Conservation Authority got a mere Rs 150 crores as against the expected 700 crore. If it weren’t so tragic you would hear me laughing. Think about it: The opening ceremony of the Common Wealth Games (our national shame) was just about the same amount. The budget has been on a steady decline: 194 crores in 2010-11 as against Rs 204 crore that they received in the financial year 2009-2010. Since its inception in 1973, Project Tiger has got about 800 crore. Even within the environment ministry, the Mission Clean Ganga got Rs 500 for 2010-11—a noble mission, but till now, its clearly been money down the drain. The Prime Minister of India has reiterated India’s commitment to save the tiger, time and again. Why isn’t that reflected in policies, actions? Why is it that the government repeatedly lets down the tiger, be it the matter of the expansion of highways that cuts into crucial tiger habitat-a mere one or two per cent of India—or King Coal ripping apart forests. The tiger-and its defenders--must battle for every inch of space. Now, it appears the tiger must beg for money, too. From India, the world’s next economic superpower. There is a pressing need for Rs 5,000 crores for the current (running) and next planning period ie from 2010-11 to 2017. For 2011-2012, the NTCA presented its case: Rs 1,100 crore was a must if they were to make a headway to shift villages out of core critical tiger habitat. The Planning Commission seemed to have agreed on about Rs 700 crores. In a previous interview to this columnist, Dr Rajesh Gopal, member secretary, NTCA said, “There are 762 villages with about 48,000 families inside core areas. The minister has taken this up with the Planning Commission and we hope to have sufficient funds to give relocation a fresh impetus.”High hopes. With the current budget it will be a miracle if we can just about manage to cover basic vitals like protection, habitat and crisis management. The relocation process, and conservation, has just suffered a major blow. The centre provides the bulk of the budget for reserves-the funding is largely the ‘carrot’ the centre uses to push the states on tiger conservation—which rests somewhere at the bottom of the barrel as far as priorities are concerned. With all its weaknesses and failures, Project Tiger has rendered an umbrella of protection to the tiger, and we need to make it a force to reckon with, not weaken it further. India has the maximum number of tigers, it is here that the effort to save the tiger took birth and became centrestage in a global arena. The world looks onto India as the leader in tiger conservation..but unless we show a steely resolve and put our money where our mouth is, that may soon be history.

Posted by Rohan Chakravarty at 15:14