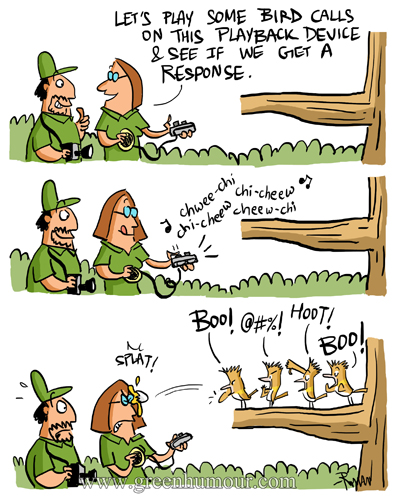 There has been quite a bit of debate in recent times about the use of playback devices to lure birds. While some birders argue that it is a non-intrusive method of procuring a sighting, playing bird calls has been proven to have several negative impacts. Playback stresses the birds out as males expend energy in outdoing a non-existent competitor. It also brings birds out in the open, exposing them to predators. Recorded calls also distract birds from more important activities like foraging. It has therefore been suggested that playback when used, must be done judiciously and patiently, respecting the bird and its ecology.

This cartoon appeared in Saevus magazine along with an article on bird call playback, in the January 2014 issue.
Posted by Rohan Chakravarty at 01:04