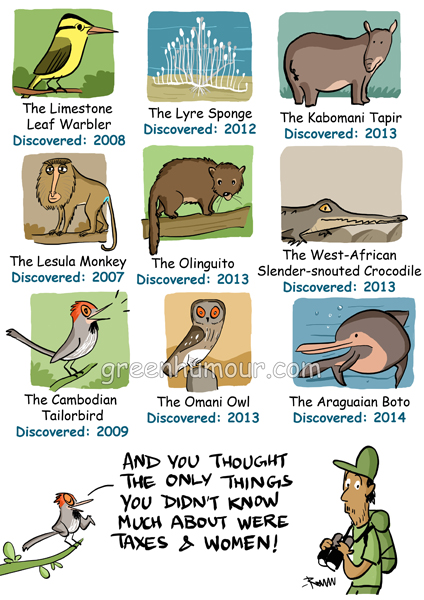 Here's an ode to the myriad of species discovered in the last few years! Beginning with the Limestone Leaf Warbler in 2008 to the newest species of dolphin described from South America, these discoveries only remind us of how little we know about our planet and how much of the earth is yet to be unearthed!

The Limestone Leaf Warbler was first seen in 1994 but was mistaken for the Sulphur-breasted Warbler. It was later described in 2008 along with the Bare-faced Bulbul, both found in the limestone karst mountains of Laos. The lyre sponge or harp sponge was discovered off the coast of California in 2012. The Kabomani Tapir described in 2013 from the Amazon, made headlines for being the first odd-toed ungulate to be described in a century. The Lesula of Congo, although known to the indigenous people, became known to the international scientific community only in 2007. The Olinguito that shot to popularity after being tagged as a cross between a cat and a teddy bear, was the first species of mammal to be described from the Americas in 35 years. The Cambodian Tailorbird was discovered in Phnom Penh during the avian influenza checks of 2009 and was assigned a unique species in 2013. The Omani Owl was discovered in the Al Hajar mountains of Oman. The Araguaian Boto is a river dolphin from Brazil, described in 2014.

This cartoon appeared in BLink, a supplement of The Hindu's Business Line today.
Posted by Rohan Chakravarty at 22:10