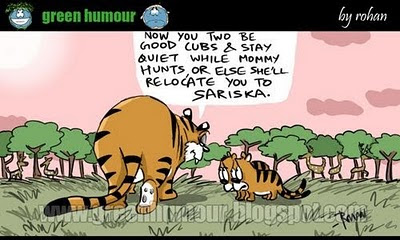 Sariska is a tiger reserve located in Alwar in Rajasthan. Once known for its palaces and tigers, poaching had become so rampant in the early 2000s that conservationists feared that all the tigers may have been killed. In 2005, journalist Jay Mazoomdar broke the news that all of Sariska's tigers had been wiped out. Several relocation measures have been undertaken recently and the population is growing slowly.

May be this is how India's tigers discipline their young, after all that has happened and has happened in Sariska.