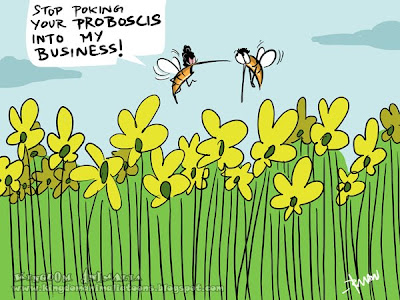 A proboscis is an elongated appendage from the head of an animal. In invertebrates, it usually refers to tubular mouth parts used for feeding and sucking. The proboscis contains muscles which enable its operation. Suction of nectar, water, blood or other fluids occurs due to the contraction and expansion of a sac present in the head.

Vertebrates too have proboscides such as the nose of the proboscis monkey and the elongated snout of the tapir.

This work is licensed under a Creative Commons Attribution-Noncommercial-No Derivative Works 2.5 India License.
Posted by Rohan Chakravarty at 13:15