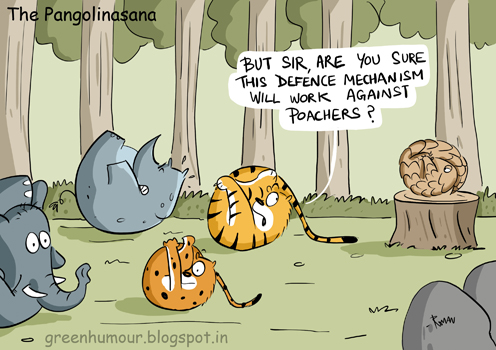 The third Saturday of February is celebrated as World Pangolin Day. The name comes from the Malay word    'pengguling', meaning something that rolls up, referring to the pangolin's defense. Its upper body is covered with keratinous scales while the belly is bare and soft, so when the animal sense danger, it rolls itself into a ball, rendering itself impenetrable to its predator's attacks. Unfortunately this harmless creature faces numerous conservation threats in hunting for bush meat, use in Chinese Medicine and cuisine, and the trade in its body parts. Reports of seizures of illegally trafficked pangolins are not uncommon. Read more about the conservation of pangolins on http://news.mongabay.com/2013/0211-hance-pity-pangolin.html
This work by Rohan Chakravarty is licensed under a Creative Commons Attribution-NonCommercial-NoDerivs 3.0 Unported License.
Posted by Rohan Chakravarty at 01:29