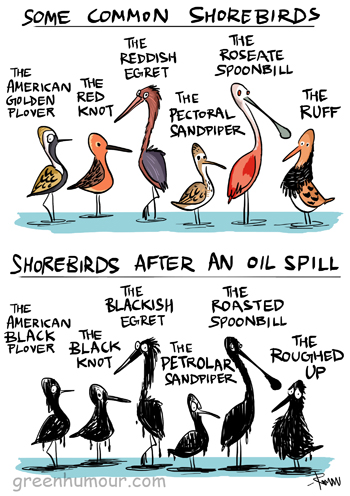 In the wake of the recent oil spill that hit Galveston Bay in North America. Oil spills have deplorable effects on waterbirds and waders, rendering the waterproofing properties of the feathers useless and exposing the skin to extreme temperatures. The affected birds instinctively try to preen the oil off their bodies, resulting in ingestion and subsequent damage to internal organs.

Although the recent spill is fortunately smaller in magnitude compared to other oil spills that have occurred in the region before, several casualties have been reported and several more expected, both avian and otherwise.

Posted by Rohan Chakravarty at 17:36