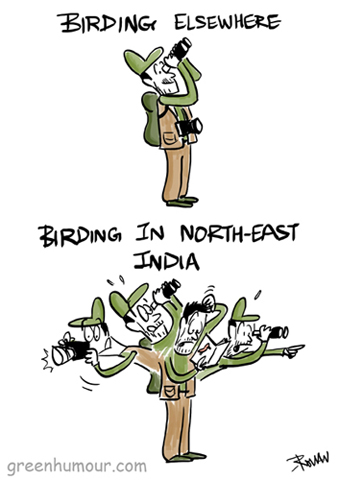 Here's a little cartoon that sums up my first birding experience in North-east India that happened in February this year, on my trip to Eaglenest Wildlife Sanctuary for the Arunachal Bird Festival (more about that here). The North-east is an extremely biodiversity-rich zone where a dense evergreen canopy covers the foothills of the Himalayas. A majority of the bird species found in India breed here and for a birder from Central India, it is like walking into a physics exam with one night of prep! Had it not been for Phurpa, a local bird guide who was so well-versed with the species there that he could actually 'communicate' with wren babblers and owlets for several minutes (!), I would not have been able to even identify half of the 70 lifers (you heard that- Seventy!) that I got to add to my checklist on this trip! The North-east has to be designated as India's birding paradise.

Hunting and habitat loss however, are rampant in these parts and are decimating wildlife populations.
Posted by Rohan Chakravarty at 08:49