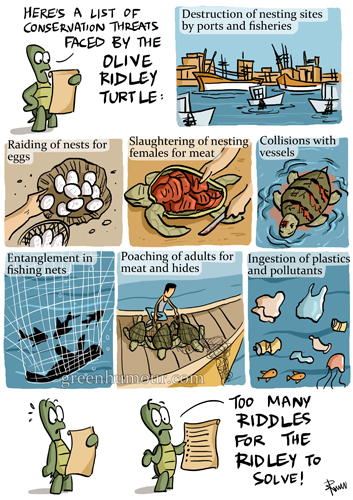 I had travelled to Velas earlier this year, which is a coastal village in India known to be one of the few nesting sites of the Olive Ridley Turtle. Only after my visit did I realize how serious the conservation threats faced by sea turtles really are. Sea turtles like the Olive Ridleys have an extremely fragile breeding ecology, and just one threat could mean a whole year's conservation efforts gone vain. There are numerous problems that threaten sea turtles, most of which have landed up in IUCN's Endangered and Critically Endangered lists in recent times. This cartoon talks about the major threats to the Olive Ridley, but these are more or less common to practically every marine turtle species.

Happy World Turtle Day, turtle lovers! I hope events such as these strive to educate and spread awareness about turtle conservation.
(PS- My caricature of the Olive Ridley can be viewed here)
Posted by Rohan Chakravarty at 00:08