The Migration of Amur Falcons 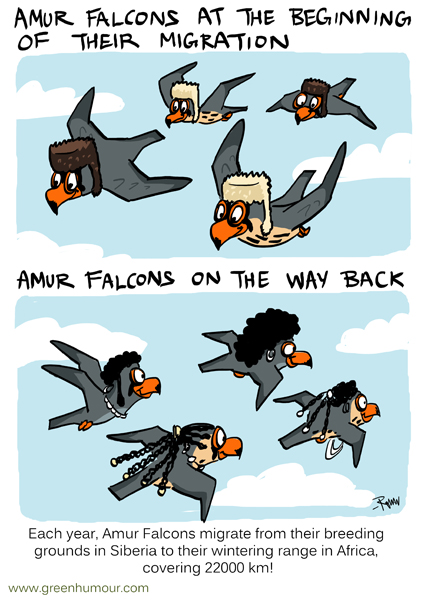 Amur Falcons are small, extremely charming raptors that breed in Siberia and winter in Southern Africa. Each year during this time (October-November) they embark on an epic migratory journey (one of the longest for a raptor) covering 11000 km each way! They fly across Central Asia over to India, and then make a fortnight-long dash across the vast Arabian Sea to reach Africa. During their maritime flight, they are known to survive on termites and dragonflies, whose migration coincides with that of the falcons.

Earlier in 2012, mass killings of Amur Falcons occurred in Nagaland, where the birds were hunted in huge numbers for bushmeat (cartoon here). A successful conservation campaign followed and the raptors now fly safely over the north-eastern state. Three of these falcons have been radio-tagged in order to understand their migration patterns better. Watch this short film on the success story of the Amur Falcon campaign, by Dusty Foot Productions here.

Here's a caricature of the Amur Falcon that was the opening piece at my exhibition of wildlife caricatures held in Bangalore in September. Like most falcons, Amurs too are sexually dimorphic. The females sport lovely diamond-shaped streaks on the belly while the male is uniform grey.You can order prints (of both the cartoon above and the caricature below, by e-mailing me on rohanchakcartoonist@gmail.com. 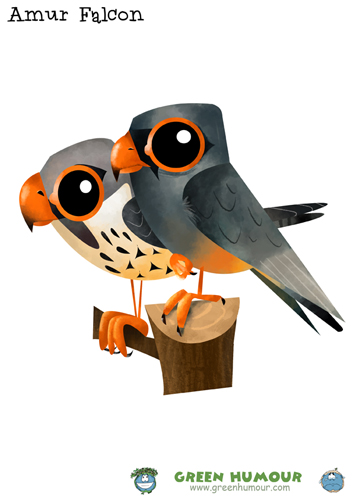 Posted by Rohan Chakravarty at 08:07