Frogs of the Western Ghats

There’s a reason why the Western Ghats are referred to as a ‘biodiversity hotspot’. Where else would you find such a raw, vibrant and bizarre array of faunal beauty? Around 180 amphibians occur in the Western Ghats and a whopping 80% of these are found nowhere else in the world! Several new discoveries are being made as researchers delve deeper into the ecology of this UNESCO World Heritage Site. Sadly, a majority of these croaksters are on the verge of extinction already because of habitat loss, fragmentation and climate change. Let me get you up close and personal with 9 of these spectacular frogs from the Western Ghats- 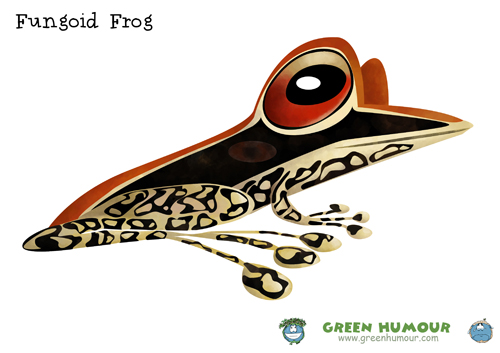 Fungoid Frog
The Fungoid Frog occurs commonly on the forest floor, and sports a beautiful bronze on its back, contrasting with a black body. The funky designer patches on the legs are however the most striking feature of this animal. Here’s one stylish frog you’re likely to meet if you’re trekking through the rainforests in the evenings! 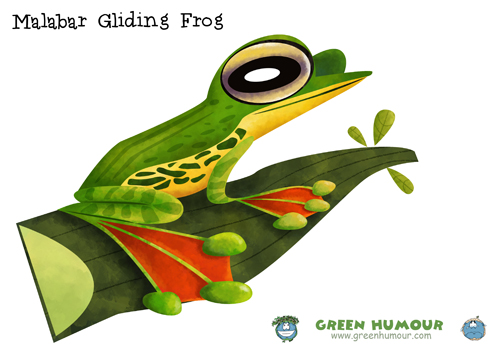 Malabar Gliding Frog
The Malabar Gliding Frog is a certified acrobat and gets its name from its ability to ‘glide’, breaking its fall by stretching those vivid, red webs on its feet. During monsoons, their foam nests can be seen around small pools of water into which tadpoles drop as they hatch. 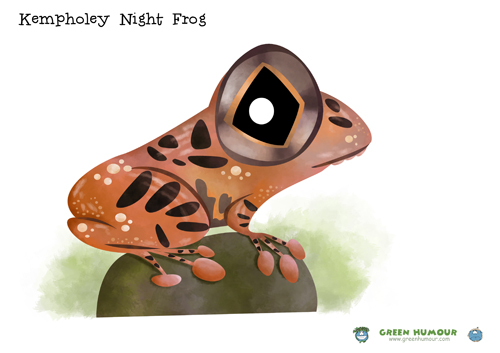 Kempholey Night Frog
Described by veteran Indian zoologist CR Narayan Rao, this frog was presumed extinct for around 74 years before recently being rediscovered by herpetologist SD Biju. A robust-looking frog with rhomboid eyes, it occurs near streams in hilly areas. 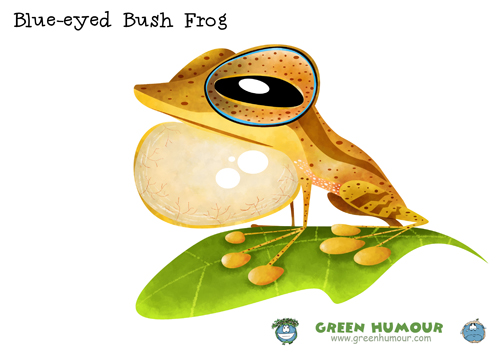 Blue-eyed Bush Frog
My favourite Western Ghats frog, this is one sparkling little fellow. The bright yellow back shines against the pitch dark night sky of the Ghats and the shiny, blue ring around the eye makes for lovely icing on the cake! This frog is also called The Coorg Bush Frog, as several known populations occur in Kodagu/ Coorg, a district situated in the Western Ghats. 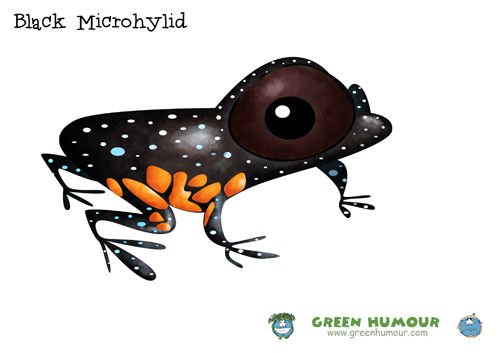 Black Microhylid
The Black Microhylid is among the rarer of the lot. Its warty, sparkly skin gives it almost a galactic appearance. The most characteristic feature though, are the red blotches on the thighs that boldly contrast with the pitch black body. The frog is known to lack a vocal sac, but still produces a loud mating call. 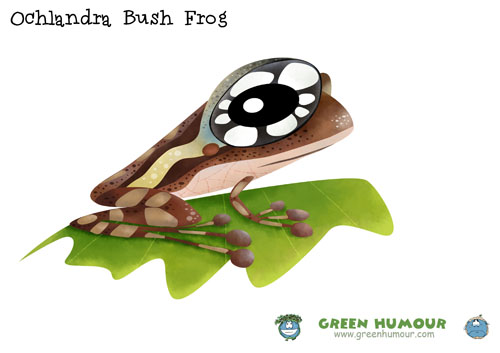 Ochlandra Bush Frog
‘Ochlandra’- a genus of bamboo endemic to Western Ghats is also home to this ornamental-looking fellow. Recently, a team of researchers led by frog biologist KS Seshadri found out that this frog and its close relative, the White-spotted Bush Frog, breed within the hollow stems of bamboos. What’s more; these species are unusual among frogs in guarding their eggs! This extraordinary mode of reproduction is the 41st reproductive strategy recorded in frogs. (More information on this here- http://www.bbc.com/earth/story/20141029-rare-frog-breeds-inside-bamboo) 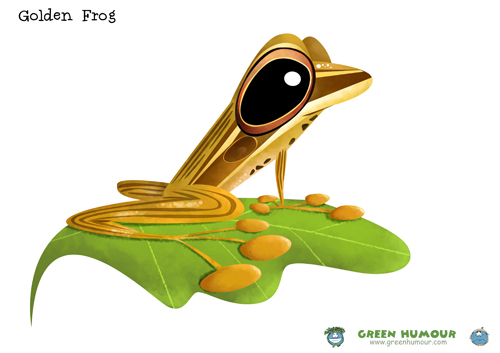 Golden Frog
The Golden Frog inhabits lower vegetation along hill forests, along streams. The dark spots on the back contrasting with a golden-yellow body are a characteristic feature. This frog is also known to occur near water-logged fields. 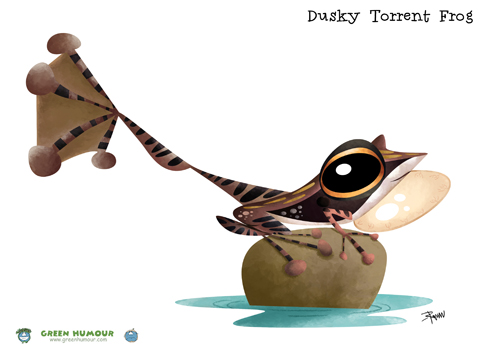 Indian Dancing Frog/ Dusky Torrent Frog
Dancing frogs are recently discovered frogs from the genus, ‘Micrixalus’ that is known for its bizarre courtship ritual. The frogs live around torrents that can be so loud that the croaks of the males may go unnoticed. To overcome this, the males gather on rocks and ‘dance’, stretching out their hind legs! This behaviour, called ‘foot-flagging’ is not just a flaunting of skills on the dance floor to get the girls, but also a no-holds barred kick-boxing tournament, in which males kick their weaker opponents away using their hind legs! Another very unusual behaviour that these frogs exhibit is the digging of ‘nests’ by females to lay eggs underwater, and then covering them with gravel, using their hind legs. 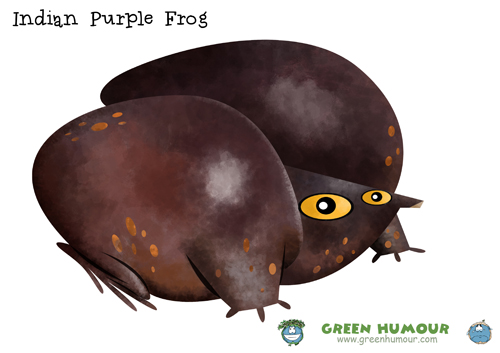 Indian Purple Frog
Like I do with my meals, I’ve saved the best morsel for the last (no, I don’t eat frogs).  Part balloon, part amphibian, this frog is unique in having a pointed snout, that also gives it the name ‘pig-nosed frog’. This creature was discovered only in 2003, possibly because it lives underground all its life, except when it is time to find a mate; the mating season lasting only about two weeks. It is known to utter croaks that sound like the clucking of a chicken!

For ordering the prints and merchandise outside of India, please visit my online store here.

The posters (both the compilation and each individual species) are available as A3 size prints, along with coasters, fridge magnets and coffee mugs that you can order by e-mailing me on rohanchakcartoonist@gmail.com. Here’s a price list of all the froggy merch available- 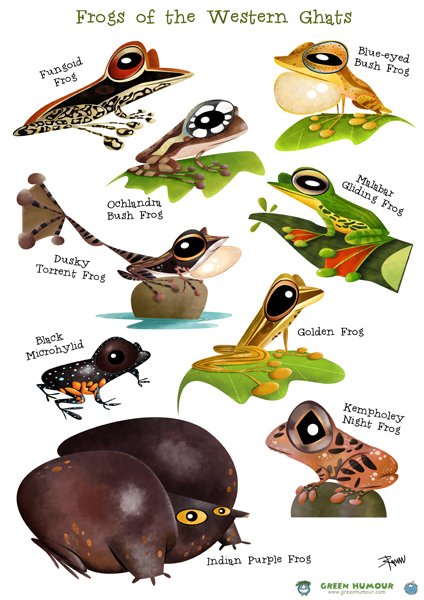 The A3 poster (mounted/ loose) 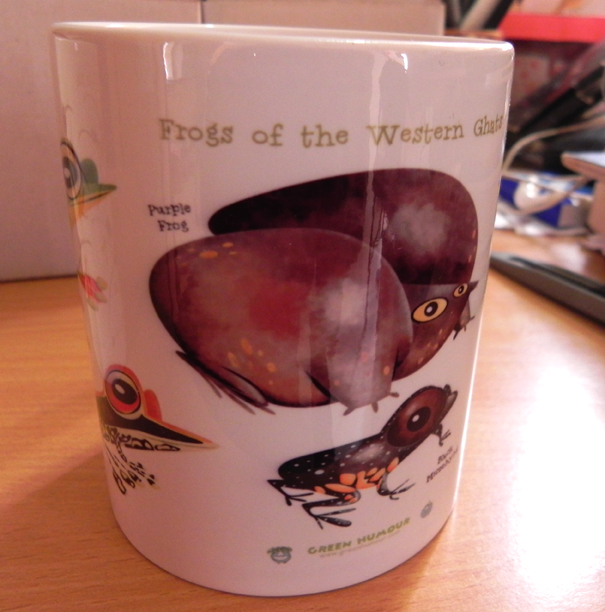 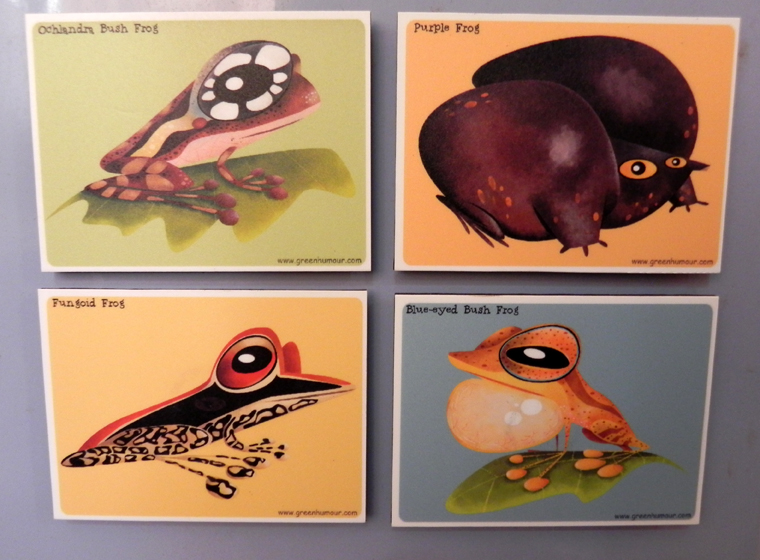 Set of any 4 frog fridge magnets

Get these frogs home and you’ll never feel like monsoon’s over!

(The frog biodiversity of the Western Ghats is impossible to depict in just one poster, so I will be following this up with a part 2 and a possible part 3 as well. Since my knowledge about frogs is rather limited, I’d like frog enthusiasts to point out some species that I’ve missed out here and I will draw them as a part of the next series).
Posted by Rohan Chakravarty at 08:09