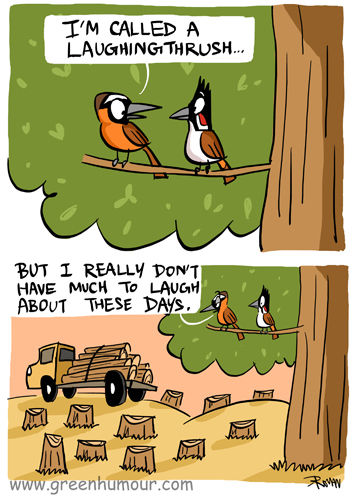 Laughingthrushes are passerine birds found in tropical forests. They are gregarious and flocks can be seen moving from one fruit tree to another. They are very shy and secretive, but give themselves
away by their boisterous, cackling call that also gives them the name 'laughingthrush'. In India, they occur in the hill forests of the Himalayas and in the rainforests of the Western Ghats.

Several species of laughingthrushes are facing declines in their populations because of large scale logging and habitat loss, including the Nilgiri Laughingthrush of South India.

The cartoon appeared in The Hindu's BLink last weekend.
Posted by Rohan Chakravarty at 22:20