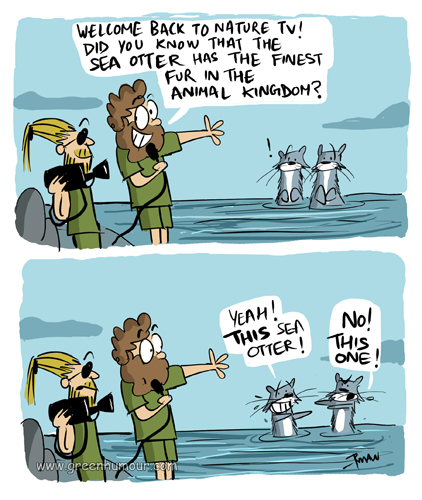 Sea otters are native to the coasts of the North Pacific Ocean. Given that they have the finest and the densest fur for any animal on the planet, it is no surprise that they have been the victims of poaching for centuries together. Russian fur hunting expeditions of the 18th century had particularly played a major part in decimating sea otter populations, as a result of which the animal still finds a place in IUCN's 'Endangered' list, despite bouncing back from the brink of extinction following conservation efforts. It still faces a threat from poaching, pollution, oil spills and conflicts with fisheries.

The cartoon appeared in my fortnightly column in The Hindu's BLink last month.
Posted by Rohan Chakravarty at 09:01