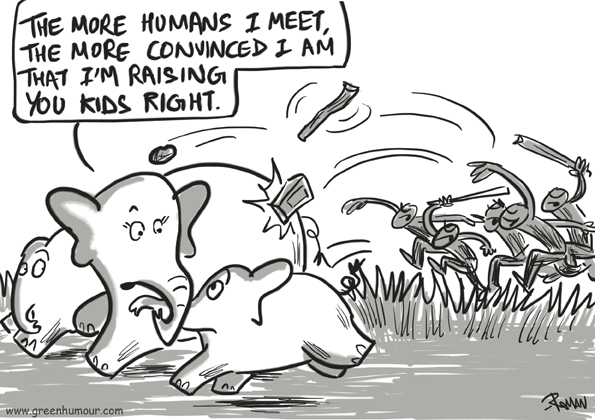 Odisha's pachyderms are in trouble. In the outskirts of Bhuwaneshwar, habitat loss has driven a herd of elephants out of its shrunken forests, wandering through rural areas in search of forest patches for food and shelter. As the elephants move about, mobs of men emerge from these areas, harassing, abusing and provoking the herd with sticks, stones. First hand reports say that these men are not acting in self-defense or to protect crops from damage (as there are no standing crops or homesteads in the area), but for mere amusement. The adults in the herd are forced to stand guard for the young, often resulting in dangerous encounters. The situation is alarming, both for elephants and people.

Sanctuary Asia has initiated a campaign 'Giant Refugees' urging Odisha Chief Minister Naveen Patnaik to intervene. You can join the campaign by doing the following-

Share the link to the campaign video (https://www.youtube.com/watch?v=PwfLDIcP7fE&feature=youtu.be) with Shri. Naveen Patnaik, the Chief Minister of Odisha. Ask him to take urgent action to protect the refugee elephants of Athgarh by:
* Directing police intervention to control mobs so that the elephants are allowed undisturbed passage.
* Setting up a task force to effect the restoration of the Chandaka-Dampara Wildlife Sanctuary, and to secure and revive its corridors to the Kapilas Wildlife Sanctuary and the Satkosia landscape in the state.
Send him an email at: cmo@nic.in
With a copy to: editorial@sanctuaryasia.com
And
Tweet to him @Naveen_Odisha with the hashtag #GiantRefugees.

Posted by Rohan Chakravarty at 21:52