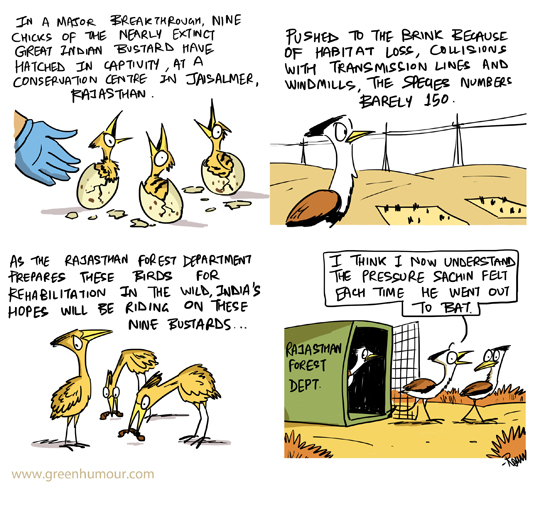 If you've been following Green Humour, you may know that the Great Indian Bustard is on its way to becoming the first bird to go extinct in independent India. But the Rajasthan Forest Department has made a major breakthrough by successfully hatching 9 bustard chicks in captivity. As the FD prepares them for rehabilitation, let's give them the cheer they deserve. Preparation and conservation of suitable habitat, and mitigation of threats to the bustards' lives (moving transmission lines underground) will determine the success of these 9 birds in the wild.

At the recently concluded COP CMS, the Great Indian Bustard was among the three endangered Indian animals to be included in Appendix 1 (the other two being the Asian Elephant and the Bengal Florican). The move is expected to bolster conservation efforts of the species across borders.

Posted by Rohan Chakravarty at 08:35