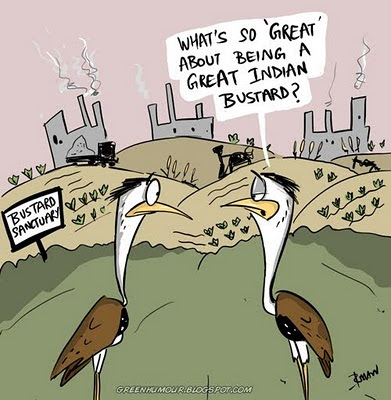 Habitat destruction for agriculture, and industrialization are the main conservation threats faced by the Great Indian Bustard Ardeotis nigriceps, an endangered species. The bird that lost out to the Peacock when India's national bird was to be chosen by the then Prime Minister, Pt. Jawaharlal Nehru, is today one of the most endangered birds in the country. Recent surveys reveal that bustard numbers are steadily declining and many of them are already extinct from areas they thrived in earlier. Some ornithologists feel that it is already too late for us to save the Great Indian Bustard.