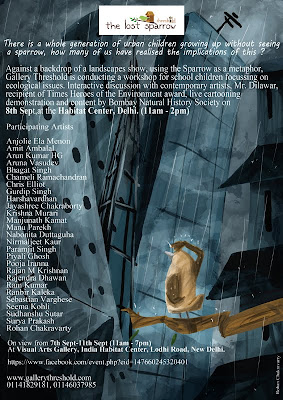 A poster I illustrated for Threshold Art Gallery, New Delhi. An exhibition of my cartoons will be conducted as a part of this event.


more info about the event- http://www.gallerythreshold.com/the_lost_sparrow.html

Waking up to the chirping of sparrows is a part of everyone’s childhood memory. Once abundant in human habitat, these birds are hardly seen today and need our help to popularize their cause. The reasons for the dwindling population of sparrows range from chemical pollution and radiation from mobile towers to overuse of pesticides and changes in architecture. Using art as an active tool for social change we aim at initiating a public art project for ecological awareness. By following an out of the gallery format to get the word out on the street via children by conducting art and awareness workshops with schools and NGOs, our objective is to create a ripple effect to sensitize the public to the cause of the "Lost Sparrow". Corporate backing and tying up with Media partners will then help spread the message through hoardings and newspaper articles. Our goal is to help create awareness and start a conservation movement to save our birds which are a vital part of our ecosystem. This movement is only a stepping stone to bridge the growing disconnect between humans and nature but it’s a start. Let’s all pitch in to bring back our chirpy little friends from the brink of extinction!
There is a whole generation of Urban Children Growing up without seeing a Sparrow; I wonder how many of us have realised the implications of this?

Against a backdrop of a landscapes show, and using the sparrow as a metaphor, Gallery Threshold is conducting workshops for school children titled The Lost Sparrow, focussing on ecological issues.
The dates are 7th to the 11th Sept '11at The Visual Arts Gallery .The workshops and discussion would give the students opportunity to interact with some leading Indian Contemporary Artists and exhibit their works alongside. Bombay Natural History Society will provide content for the talk and slide show .Mr Dilawar Mohammed of Nature Forever Society, an NGO Specializing in Sparrows, will give a talk on the 8th at Habitat. The Vasant Valley School , Pathways ( Gurgaon) , The Mother’s International School , The Sriram School , Modern School , DPS are some of the participating schools .
Using art as an active tool for social change, the idea is to create a ripple effect where these children will take on the role of spreading the word by adopting another less privileged school/ community and within their own societies. A Carpentry and pottery project to create and distribute bird houses is also planned.
The project will then move out of the confines of the gallery space and as it gains its own momentum, move into the larger realm of society and on the street through hoardings and awareness campaigns.

Once most commonly seen species among birds, often flock flirting uninvited in our courtyard, but today they are becoming increasingly rare all over the world. Sparrows can be found on every continent except Antarctica.
It is thought that the house sparrow originated in the Mediterranean and expanded into Europe with the growth of Civilization.

House sparrows are intelligent birds and congregate in large flocks to feed and roost, and bird colonies may be made up of several family flocks. They generally forage on the ground, hopping and scratching with their feet, or in trees and bushes while looking for insects.
House sparrows will easily come to either platform or hopper feeders offering mixed seed, sunflower seeds or cracked corn, and they frequently nest along the eaves of houses.

There are five different species of sparrows found in India:

Loss of food, primarily small grains (rice and millet). Worms and insects – the once familiar horse and draught animal dung on roads was the breeder of many a beetle that the house sparrow pecked upon.
A study suggests that with introduction of methyl tertiary esters as anti knock agent in gasoline has caused great reduction of insect populations in cities that has adversely affected the sparrow's food chain.
Change in lifestyle, particularly architecture of modern houses is also pushing house sparrows to the brink of extinction Loss of nesting sites as the current Ferro- concrete machines for living designed, leave no space for the sparrow to make its nests, there are no gaps as in tile housed with overhanging verandas etc.
Indiscriminate use of agricultural chemicals by farmers that poison the birds leading to death of many breeding pairs.
Off late mobile phone towers are thought to affect the health of sparrows as well!! The radiation from the towers hampers the reproduction process, due to which eggs hatch prematurely and as a result of which population is restricted.
Recent research suggests that the hatchlings require pure insect and worms as food for first two weeks – this is not available due to many factors such as growing too many exotics plants as avenue and ornamental trees in houses, towns and cities. The exotic plants are not affected by insects and worms, thus any food for the sparrow.
Poor hygiene in human settlements has led to increase in predators of sparrows.
Plastic packaging has ensured that there are no spilled grains in the street for the sparrow to feed on!!
It is estimated that the decline of 17 million draught animals littered the roads with their dung was a breeding ground for worms and insects that were food for the sparrow, with the decline of the animal drawn carriages the sparrows are now gone as well.
Excessive area under corn is another indirect reason as the small birds cannot feed on corn!!
How to conserve and multiply the friendly house sparrow:

Make nest boxes out of wood, bamboo or clay pots, filled them with straw and hang them over window or sunshade etc.
Feed grains and clean water to sparrows wherever found.
Campaign or advocate less chemicals in farming. Use organic repellents.
If a pair is found nesting anywhere, patiently record their behaviour like feeding, egg laying and new hatchlings.
Keeping a few horse carriages around the villages might help to make leisure trips to temples and pilgrimage centre plus help feed the sparrow.
Initiating measures like:

Providing nest boxes and feeders
Height in selected households to increase number of nesting birds.
Increasing native plants as hedges in the vicinity of these populations.
Reducing pesticide use in the surroundings by awareness campaigns Research activities planned for future.
Monitor the nest boxes for colonizing by sparrows and document activity using student volunteers from schools and colleges.
Locate individual houses where few pairs exist and convince householders to take up conservation measures.
Identify local predator threats like cats; squirrels and sparrow hawks.
Start dialogue with builders; masons and carpenters to provide space for sparrow nests in new constructions.
Easy ways to attract Sparrows:

Food
Shop-bought seed mixes are fine or you can mix your own - a basic mix should contain flaked maize, peanut granules and sunflower seeds. House sparrows like small seeds. Never feed milk or desiccated coconut. And mouldy bread can also prove hazardous and attract rats.
Water
During summer droughts and in the coldest months when water in ponds or puddles might be frozen, most small birds need to drink at least twice a day to replace moisture lost through transpiration. The easiest way to provide water is in the form of a birdbath. Make sure that this is cleaned regularly and does not get filled up with dead leaves or other garden detritus which might rot.
Insects
Sparrows feed insects to their young. The decline in invertebrate numbers is one possible reason for the decline of this particular species. Insects can be encouraged by a number of simple methods, according to the invertebrate charity Buglife. The key thing to remember is not to be too tidy. Building a log pile - you can use old off cuts or pruned branches or whatever happens to be lying around - can offer a home to beetles, while centipedes and ground beetles, loved by gardeners because they eat plant predators, will find a well-placed stone useful cover.
Nesting sites
Put up a nest box in your garden or terrace. Place the box away from human activity and out of the reach of cats and other predators. Position the box so that it is north or east-facing, which helps to avoid the strongest sunshine and the wettest winds, and tilt the box so that it faces downwards to allow rain to run off. The box should be cleaned during the winter to prevent a build-up of debris and remove parasites such as fleas. A handful of clean hay or wood shavings may encourage winter use. If desired, one could also use bird box cameras so you can keep an eye on the nestlings without disturbing them.
Trees
Plant more trees since they provide cover for nesting birds, refuge for insects in the breeding season and a steady supply of seeds in the winter for sparrows.
Flowers
Plant flowers as they are nectar-rich and attract more insects which in turn attract more birds. Try to ensure that something is in flower throughout the year, which will encourage birds for longer periods. At the end of the season, leave seed heads in place - they'll provide food during the winter.
Lawns
Many gardeners obsess about the patch of grass between the flowerbeds and paths. But in order to attract wildlife, such as worms and the sort of insects preferred by sparrows, the rules should be relaxed a little. In summer, precious water resources should not be wasted on the lawn. No matter how brown it gets, it will survive and will green up astonishingly fast after the first heavy shower. Neither should grass be cut too short. Longer grass maintains moisture. Avoid the use of fertiliser and weed killer and, if you can bear it, allow the weeds to grow - clover, for example, puts nitrogen naturally back into the soil. You might even want to let a patch run wild. Not only are grass flowers pleasing to look at, they also attract insects and birds.
Chemicals
The use of pesticides on farmland grew massively from the 1960s and is cited as a major factor in the decline of farm bird species. In recent years, pesticides have become more effective. As a result, the tonnage used has dropped. In the garden, their use can be limited very easily. Try to choose plant varieties that harbour friendly insects that eat garden pests, such as asters (Michaelmas daisies), poached egg flowers and marigolds. Thrushes, blackbirds and hedgehogs can also be harmed by the use of slug pellets. These species in turn keep slug and snail numbers under control.
Posted by Rohan Chakravarty at 11:25