How Ornithologists Get Married 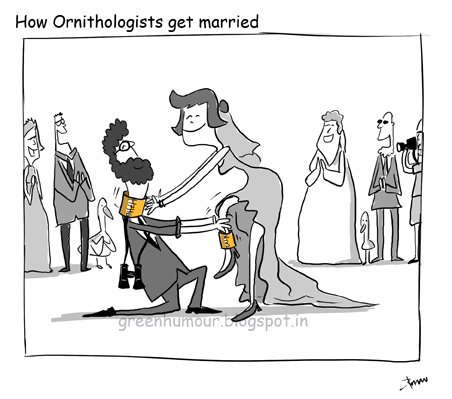 Bird ringing or bird banding is a technique used in the study of wild birds, by attaching a small, individually numbered, metal or plastic tag to their legs or wings, so that various aspects of the bird's life can be studied by the measurements taken during the capture, such as molt, fat content, age, sex, wing and tail. This method has proved crucial in studying migratory patterns and also to record distances and track migration paths of several species of passerines, waders, raptors etc. In India, it has revealed several previously unknown migratory trends for birds such as warblers, waterbirds like the Bar-headed Goose and several waders, raptors like the Amur Falcon and many more. Mistnets are used to capture the birds which are fitted with rings of a distinct colour, or containing different numbers for each individual, and then released.