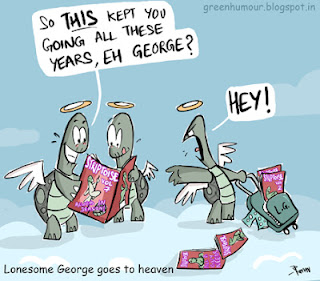 Lonesome George, the sole survivor of the extinct Chelonoidis nigra abingdoni , a sub-species of the Galapagos Giant Tortoise native to Ecuador's Pinta Island; died in captivity on 24th June 2012, thus wiping out his entire race. This sub-species was hunted rampantly by natives for meat, and conservation efforts were made too late. It seems that the 'prevention-better-than-cure' idea is quite difficult for us to learn.