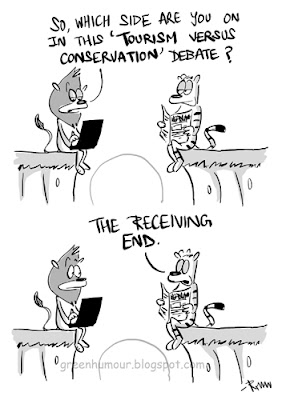 There has been much debate about tourism and its impacts on conservation following the Supreme Court's decision to ban tourism in core areas of tiger reserves. While some conservationists think that tourism helps keep a check on wildlife crimes, others feel that its overall impacts on conservation are negative. Whatever the outcome of this debate turns out to be, allow me to present to you the POV of the national animal.
Let me simplify the issue a bit.
This work by Rohan Chakravarty is licensed under a Creative Commons Attribution-NonCommercial-NoDerivs 3.0 Unported License.
Posted by Rohan Chakravarty at 22:33