A Bad Day in the Life of a Sidewinder 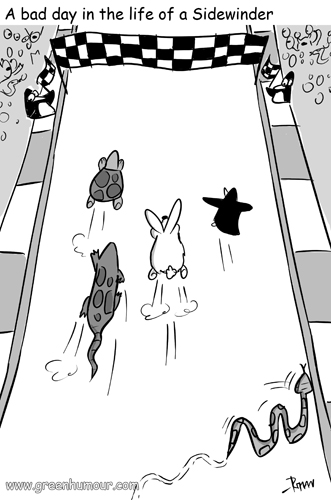 The Sidewinder, a rattlesnake of the genus Crolatus found in south-western USA and northern Mexico, gets its name from its unusual way of locomotion- rapid sideways movements that are believed to yield traction on the windblown desert sand. A similar manner of locomotion is adopted by the Horned and the Sidewinding Adders of Africa. As the bodies of these snakes progress over the sand, they leave behind J-shaped trails characteristic of sidewinders.

16th July is celebrated as World Snake Day! This cartoon appears in the July '14 issue of Saevus magazine.
Posted by Rohan Chakravarty at 01:12