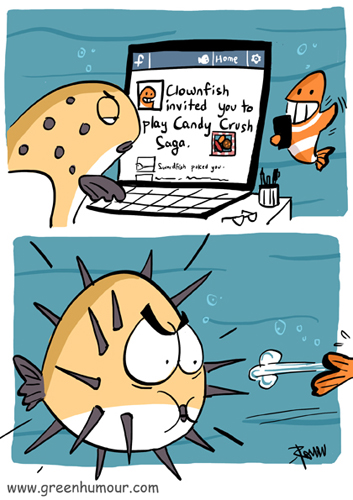 The pufferfish's unique defense mechanism compensates for its slow speed. When cornered, it fills its elastic stomach with water and inflates itself into a spiny balloon, appearing dangerous and unpalatable to its predator. It is also the second most poisonous vertebrate on earth! Members of the family Tetraodontidae also include balloonfish, blowfish, bubblefish, globefish, swellfish and toadfish. The family name refers to four large teeth the animals are equipped with to crush the shells of their natural prey- crustaceans an mollusks.

This one is for all my Candy Crush playing Facebook-friends!
Posted by Rohan Chakravarty at 07:23