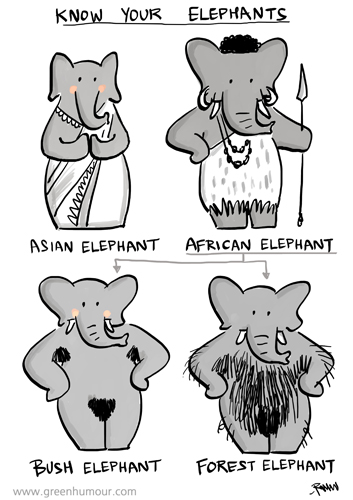 There are three species of elephants in the world recognized today, after recent genetic studies showed that the Bush and the Forest Elephants, earlier considered sub-species of the African Elephant, might actually be separate species. The Forest Elephant differs from the Bush Elephant in having rounder ears, straighter tusks and a different number of toenails. No, their names have nothing to do with pubic hair!

I'll be speaking about art, wildlife and elephants today (21st December, 2014) at 6pm at the Rangoli Metro Art Gallery, MG Road (Bangalore, India) in an event by Friends of Elephants along with some amazing fellow wildlife artists- Sangeetha Kadur, Arjun Srivathsa and Abhisheka Gopal. Drop by!

Posted by Rohan Chakravarty at 09:57