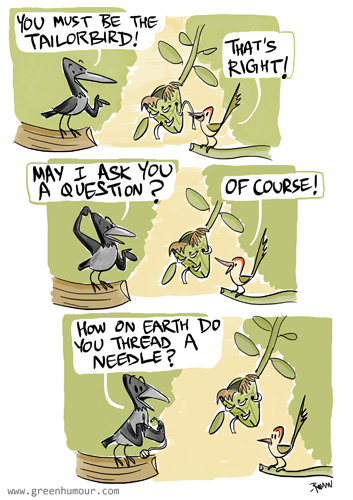 Monsoon is here and with it, the nesting season of the tailorbird! This little green dweller of the bushes is a bundle of energy, and anyone who has seen the song and dance of the tailor would agree with me. But what the tailorbird is really famous for, is its skilfully 'sewn' nest. The tiny craftsman first punches a series of holes in the chosen leaves, and then passes a lint through these holes, stitching them together to form a cup-shaped nest. Based on my own observations, the nest site is selected and the nest woven in such a way that it is nearly waterproof! It is of no surprise that Kipling chose to immortalize the tailorbird as his Jungle Book character, Darzee.

The comic appeared in my column with The Hindu BLink here.
Posted by Rohan Chakravarty at 11:14