A Plea Against Playback 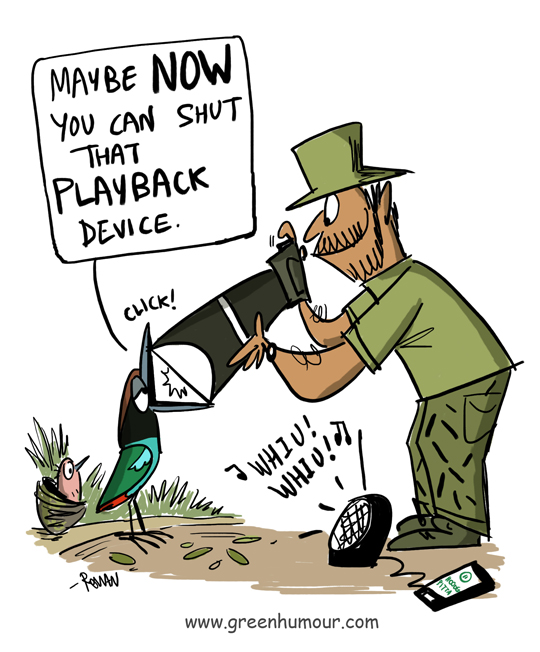 Bird song playback has had several advantages: it has helped ornithologists discover, record and describe bird species, their ranges and distributions. Birds that are skulkers by nature are impossible to observe without this 'deception'. But ever since playback has landed in the hands of photographers and bird tour operators, this tool has been nothing but peril. Bird photographers have mindlessly been exposing birds to the risks that come with playback: an unnecessary expenditure of the bird's energy, and exposing itself to its predators.

Many birdwatchers and even Indian scientists who are now conducting bird photo tours are guilty of propagating the use of playback, and the practice now goes unchecked in some of India's most popular birding destinations such as the Western, Central and Eastern Himalayas, the Western Ghats and the Andaman and Nicobar Islands. Unfortunately some of our rarest and most endangered birds are also found in these hotspots. Birds are frequently harassed, disturbed, and driven out of cover, all for the sake of a great close-up. In a recent case, a Hooded Pitta (the bird in the cartoon) was forced to abandon its nest after being hounded by playback-photographers in Bengal.

In my opinion, a scientist with a permit for research in a given area should be the only one permitted to use playback. Birdwatchers, bird tour operators and photographers found using playback must be apprehended and punished. The current rampancy of playback and the sheer number of people using it today, has made the situation something of an emergency. I hence request you to join me in appealing to forest departments across the country to ban this practice in and around their areas of jurisdiction. The Wildlife Protection Act of India outlines baiting of wildlife in any form as an illegal and punishable offence. As playback can be considered a form of baiting, I appeal to the forest officers and law-makers who are reading this, to work on laying concrete guidelines on the usage of playback, on priority.

Posted by Rohan Chakravarty at 08:04