The Wildlife Map of the Greater Bay Area 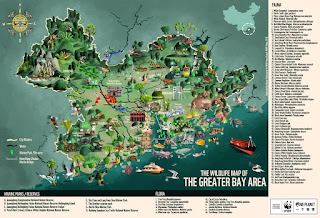 The Pearl River Delta in Guangdong, China, is the most densely populated region in the world. Despite this, the river and adjoining areas host a rich diversity of wildlife. From creatures that have made big cities their homes, like the Crested Myna and the Red-billed Blue Magpie, to megafauna that still manages to eke a secretive life, such as the Chinese Serow, the bay shelters more wildlife than its residents can possibly imagine. As the Pearl River drains into the South China Sea, the distribution of biodiversity too takes an interesting course. Hard and soft corals pop up wherever opportunity resents itself in the form of clear waters, while keystone species like the Chinese White Dolphin and the Chinese Bahaba can still be found pulling themselves through in the severely polluted mouth of the Pearl River. Needless to mention, the region faces tremendous conservation pressures, which include habitat loss, water pollution, the world's most rapid rate of urbanization and development.

As part of my field research for the project, I spent a week in China in August last year, visiting some of the key places denoted in the map, and traversing the length of the river. The illustration and its various elements are being used by WWF China and WWF Hong Kong in various awareness material and merchandise. Thanks once again to WWF for commissioning the project!