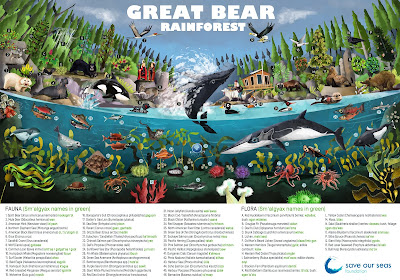 One of the most unique landscapes on earth where temperate rainforests meet the sea, Great Bear Rainforest in British Columbia, Canada, is a mystical forest.  And this mystique transcends boundaries between land, water and air, and those between wildlife and native communities. The First Nations People of Canada that call the rainforest their home, have been fiercely safeguarding the forests from industrial logging and oil and gas companies. The rainforest is inhabited by many animals sacred to the First Nations People, such as the Spirit Bear (a rare sub-species of the American Black Bear in which some individuals are coloured white!), the Raven, the Bald Eagle, many species of Salmon, and of course, cetaceans like the Humpback and Fin Whales, and Orcas. As a result of rainforest meeting the sea, various interactions that are usually unheard of are witnessed here, such as enormous tracts of cedar and spruce meeting waters ruled by kelp forests, bears and wolves preying on spawning salmon, seals and sea otters bumping into wolverines and minks!

Other than its myriad flora and fauna, the illustration also depicts a First Nations couple in ethnic attire that celebrates the spirit of the animals they worship, veteran whale biologists Janie Wray and Hermann Meuter, who run the Cetacea Lab at Great Bear. Thanks to the Save Our Seas Foundation for commissioning the illustration.

Posted by Rohan Chakravarty at 15:04