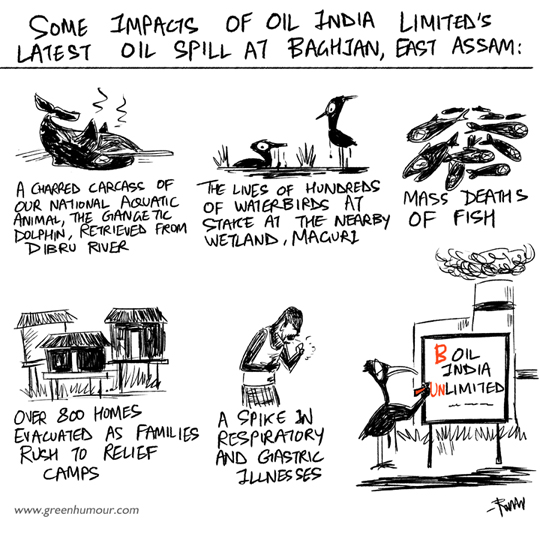 Chances are that you have not heard or read about a major ecological and public health crisis brewing in Eastern Assam on any mainstream media channel. A crude oil pipe blowout caused a major oil spill at Baghjan, and the lives of marsh and aquatic wildlife, as well as villagers are now at grave risk, courtesy of Oil India Limited, the Indian government's oil extraction company.

How is this related to the ongoing national environmental crisis? By now you may be vaguely familiar with the many disastrous projects being planned in North-east India (such as a dam in the seismically sensitive Dibang Valley of Arunachal Pradesh, and a coal mine in Assam's Dehing Patkai Elephant Reserve). You may also be familiar with the MoEFCC's proposed revisions to the Environment Impact Assessment protocol, which seeks to do away with EIA for major projects. OIL has a record of violating Eco-sensitive zone boundaries and constructing pipelines even before due environmental clearances are obtained. To put it simply, the EIA revisions could legalize all of this. Read more about the draft EIA and what you can do to oppose it here.

Posted by Rohan Chakravarty at 07:57