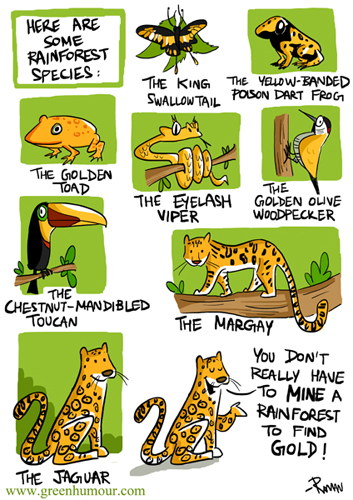 Costa Rica's rainforests are believed to have the highest biodiversity for any country! This is probably because of the fact that the landmass that is now Costa Rica and Panama served as a bridge between North and South America three to five million years ago, allowing the different flora and fauna to intermingle. Costa Rica's biodiversity makes for nearly 4% of all the species found in the world!

Infinito Gold, a Canadian gold mining company has slapped Costa Rica with a $1 billion lawsuit because the country denied them the rights to start an open pit mine in the rainforest. Several predictions have been made about the toxicity of the mining activity and its impact on the health of the rainforest. An online petition has also been started against the lawsuit here- http://action.sumofus.org/a/mining-costarica/8/2/?sub=fb We've already seen the tremendous damage done to the Amazon by gold mining, and the rainforests of Costa Rica must not fall prey at any cost!
Posted by Rohan Chakravarty at 00:11