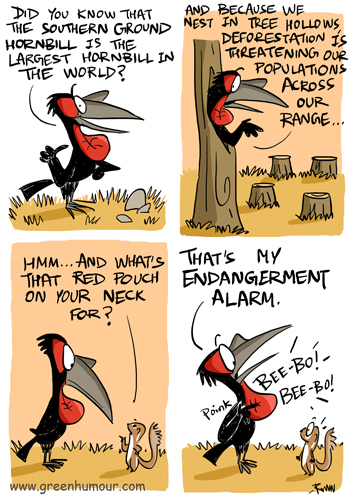 The Southern Ground Hornbill of South Africa is a very special bird! First of all, this bird grows to a massive 130 cm making it the largest hornbill in the world. Secondly, it is an extremely social bird, not only foraging in groups but even breeding cooperatively, with the breeding pair being assisted by babysitters! These helpers are actually inexperienced birds who are being trained in the process to raise their own young. Also, southern African cultures revere the Ground Hornbill, associating it with the arrival of monsoons. I'm also told that the hornbill has the most gorgeous eyelashes!

Owing to deforestation and habitat loss, the bird finds itself in the Vulnerable category of IUCN's Red List today. In South Africa where the bird has been best studied, it is listed as critically endangered. What imperils its conservation further is the fact that it is an extremely slow breeder, raising only one chick in three years. Incubation lasts for 45 days, followed by another 85 days of the fledgling being dependent on the parents, which is the longest period of dependency for any bird chick.

Here's a caricature of the Southern Ground Hornbill I did for the Mabula Ground Hornbill Project, that is working for the conservation of this species in South Africa (Facebook page here) I sure hope to meet this handsome giant some day! (PS- check out the eyelashes!) 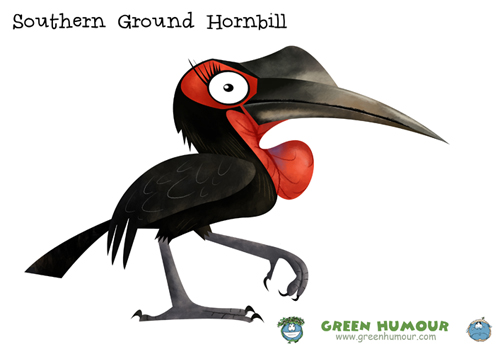 Posted by Rohan Chakravarty at 00:07